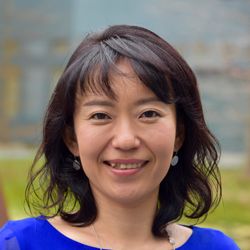 
Ayami joined Verbalplanet in July 2017 learning German. Living and working in a German speaking part of Switzerland meant that for Ayami it was essential to be able to converse in German at a professional level. With two children and a busy work schedule, Ayami needed a solution that could be flexible to fit around her lifestyle but also customized, allowing her to focus on advanced aspects of the German language.

Learning German on Skype meant that Ayami was able to take classes online from work or home with an experienced native speaking German tutor. The individual classes prepared by Ayami's tutor ensured that each lesson was focused on Ayami's individual language goals, culminating in Ayami achieving an amazing level C2 in the Goethe Institut Zertifikat.

In need of a confidence boost

I'm learning German and joined Verbalplanet in July 2017. I live in a German speaking part of Switzerland and so I use German every day at work.

While my listening and speaking skills were quite good, I had difficulties in reading and writing in German. Writing business e-mails in German was a real challenge for me and I always felt insecure about it, therefore, I decided to learn German to be able to read and write with confidence.

As I decided to learn German, I visited some of the local language schools. However, they have a fixed schedule and it was difficult for me to attend the class every week due to my work as well as my family (two small children aged 2 and 4). I needed a flexible teacher with whom I could make an appointment whenever I had time. Also, I needed a teacher who could teach me more advanced German, particularly focusing on reading and writing. Most of the classes I visited locally were not tailor made and had standard textbooks, which I didn’t find useful for my purpose. I looked for online language courses on the internet and found Verbalplanet. Flexibility in terms of time and location as well as personalized learning content were the key for me in choosing to learn a language online.

I checked various online platforms and I found Verbalplanet most professional and easy to use. From the various functions Verbalplanet offers, I like the trial sessions very much and easy booking and rescheduling make my life easier. One function I would love to have on Verbalplanet is to copy the lesson schedules into the Outlook Calendar. If that function becomes available, Verbalpalnet will be perfect.

I looked for online language courses on the internet and found Verbalplanet. Flexibility in terms of time and location as well as personalized learning content were the key for me in choosing to learn a language online with them.

Hello, my name is Robert Rudolf and I'm an online German teacher with Verbalplanet. I am a native German speaker and I have been an online language tutor since September 2016.

Ayami Hamakawa has been one of my students on Verbalplanet, and to date I have taught 789 classes and have 29 reviews from other students who have also been learning German online with me. If you would like to improve your ability to speak German I am sure I can help you progress and achive your language goals. My classes have an emphasis on conversation and oral skills so really help to boost your confidence. I'm also currently offering a discounted initial trial lesson at 50% of my normal lesson price for new students.

If you would like to find out more, please click on my profile link to get in touch and we can discuss how I can help you learn to speak German with greater confidence and fluency.

I am using German every day in the office and now I feel much more confident to write e-mails in German. I also feel comfortable reading German newspaper and articles. It used to be a chore to read German documents but now I enjoy reading.

Verbalplanet was the best choice for me to be able to manage my work and family and still find time to learn the language. It is so flexible and also personalized to meet my needs. It surely met my expectations. Verbalplanet helped me to achieve my goal to achieve level C2 in German.

I am using German every day in the office and now I feel much more confident to write e-mails in German. I also feel comfortable reading German newspaper and articles. It used to be a chore to read German documents but now I enjoy reading - it's really expanded my horizons.

The best thing about being able to speak a second (in my case a third) language is that you can communicate with family and friends, neighbours and colleagues without worrying about language barriers. Also learning a language helps you to understand the culture and history of the countries where the language is spoken so it enriches your life.

I will definitely be recommending Verbalplanet to a friend who wants a flexible way to learn a language but with a tailored approach to fit their needs.

The German language is one of the world's major languages and a member of the Germanic branch of the Indo-European language family.

Around the world, German is spoken by approximately 110 million native speakers and another 18 million non-native speakers, primarily in Germany, Austria, Liechtenstein, Luxembourg and in two-thirds of Switzerland.

You'll be in good company. Students from around the world use Verbalplanet to learn German and you can too.